Getting into the shop much later than expected on Saturday resulted in not quite finishing up on the left wing tip closeout … but good progress was made none the less.

After removing the blue protective film from along the rivet lines of both upper wing tip skins, the W-1204B-L upper aft tip skin is the first to be placed onto the wing skeleton followed by the W-1204A-L upper forward tip skin. 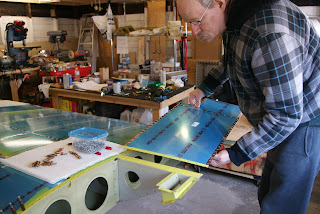 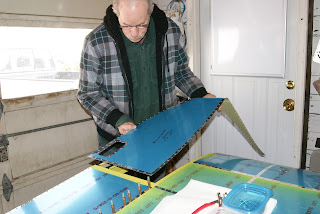 Once both skins are secured into position with Clecos, four holes need to be identified for no riveting at this time …. the outer most hole in both the main and aft spars on the upper side of the wing and the two holes at the very end of the W-1204A-L skin which wrap around under the wing at the point the skin terminates at the main spar. Additional parts need to be riveted using those holes, but they get installed a little later. 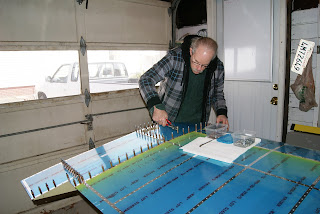 Securing the upper wing tip skins onto the left wing’s skeleton for riveting. 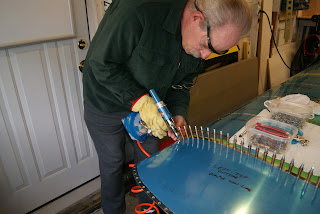 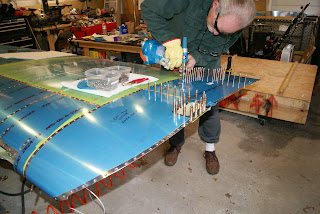 Once the upper wing tip skins were riveted in place, the W-1204F-L wing tip rib was tested for fit. The plans suggest there may be interference with the rear spar and to trim the spar if necessary… yep there was. 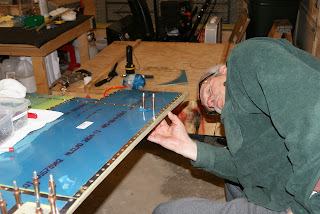 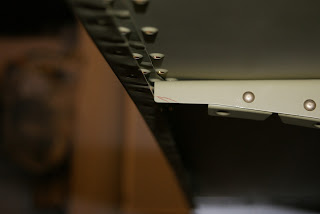 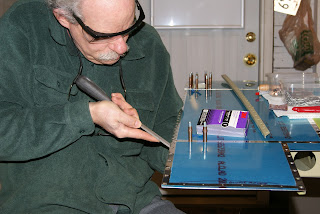 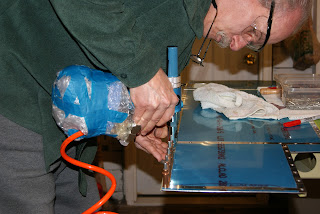 Riveting the W-1204F-L aft rib in place onto the W-1204B-L upper tip skin.
The W-1204E rib was gently fluted on both upper and lower sides the same amount (and repeated if necessary) until the rib set evenly along the edge of the W-1204A skin. (The rib was not installed and removed repetedly, just held aginst the edge of the W-1204A skin by hand.) This process was repeated moving forward. More and more aggressive fluting was required on the rib to match the curve of the W-1204A skin’s edge the further forward you get to the front of the rib. In particular, the forward most flutes needed to be quite deep. So a note of caution for other builders … I got my fluting pliers a little too deep and that combined with the aggressive fluting slightly distorted the web of the rib which can be seen as a slight depression of the rib under the skin. I will know better for the right wing. Also, there is enough room between the rivet holes to make two shallower flutes as opposed to one aggressive flute and this is the way to go. Hindsight is 20/20. Unfortunately, I did not take any photos of this process, but it was truly easy to accomplish starting at the main spar and working forward. Remember to flute both upper and lower flanges if the rib evenly because this helps prevent the rib from twisting. 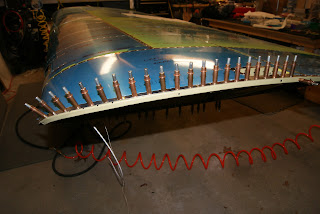 The W-1204E-L forward tip rib secured with Clecos and ready for riveting.
In the above photo between the first and seventh Cleco from the left, the viewer can easily see the valleys of the V notches Van’s has pre cut into both sides of the forward portion of the W-1204E tip rib. This allows the forward portion of the rib to follow the aggressive curve in the W-1204A forward tip skin. The resulting open gap is normal and can be seen on all RV-12’s unless they have been filled or covered. If the above photo is expanded, just to the right of where the V notches end, one can clearly see the results of my getting the fluting pliers too deep when setting the flutes into the rib. If you look closely between the Clecos, a few locations have small deformations which can be seen under the W-1204A skin. It bothers me that that was a small technique screw-up, but not enough to replace the rib.
Posted by John at 7:25 AM