A momentous day at DOG Aviation as the RV-12’s left wing was finally completed … well almost. All the metal work is completed, but there is still the fiberglass wing tip mount for the navigation/strobe lighting yet to install. This will require a little fiberglass work so rather than mess with it twice, will just wait until the right wing is completed and work on them both concurrently.

Wing tip closeout began by flipping the wing over to expose the wing tip skeleton. The W-1204D-L wing tip close-out skin is the one that had the multitude of tabs, each requiring custom bending to various angles. I was prepared to fight and fight with it but amazed me how well it fit … astounding! Here again, praise to Van’s design team … it fit virtually perfect. There was still the one tab to form which I purposely left unbent and the 17 degree tab was tweaked to improve the fit after trial fitting the W-1204H-L wing tip trailing edge. 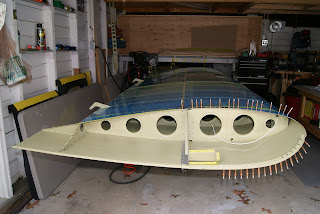 Left wing upside down exposing the wing tip skeleton about to be closed-out.
The forward wing tip rib was purposely not riveted when called for in the instructions so a custom fit of the first tab at the leading edge would be easier. I’m not sure if what I did was worth it or not, but I made an effort to close the large gap that is common between the leading edge tab (the one normally bent to 116 degrees) on the W-1204D-L skin and the forward wing tip rib. Was able to close the gap by approximately 50% without re-drilling the hole. Taking measurements, it was discovered if the gap were closed totally the hole would not lineup without re-drilling approximately a half hole or more off. I did not want to do that, so there is still a little gap. 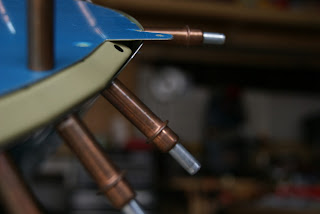 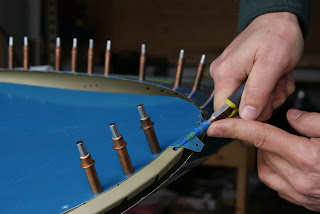 Bending the tab down onto the forward wing tip rib. 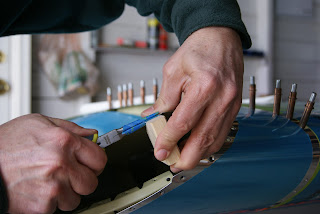 Using the bending block to bend the tab in small increments until the fit was acceptable. 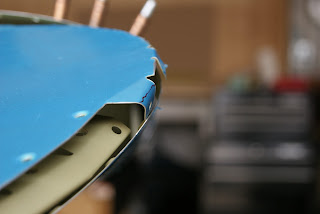 Getting close … at this point the tab was tweaked just a little more for a good fit.
Now that the overall fit of the W-1204D-L skin was tested to be very good, the skin was removed and all the holes were then dimpled. Sadly, in my haste to move on and finish up the wing today, I forgot to take a photo of the final outcome of the tab bending. 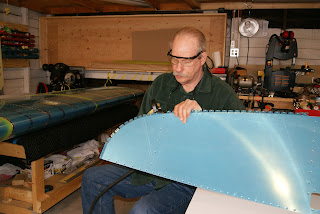 Using the pneumatic squeezer to dimple the tabs on the W-1204D-L wing tip close-out skin.
The W-1204D-L wing tip close-out skin was then secured in place with Clecos and riveted in place.
Builder Tip:
CAUTION – If you are building an RV-12 wing and also planning to install the wing tip navigation/strobe lights, there are three rivet holes you will want to leave open when riveting the W-1204D skins – those rivet holes are pointed out in the next photo. Also … if you are dimpling you’re RV-12 for flush rivets and also installing the nav/strobe lights, you DO NOT want to dimple the three holes mentioned above and pointed out in the photo below. Those holes will be used to mount the fiberglass mounting fixture on the wing tip for the nav/strobe lights. The fiberglass is plenty thick (at least 44 thousands) for countersinking. It is not good practice to dimple the fiberglass so countersink it and leave the metal below the countersunk holes flat. You don’t want to countersink the fiberglass and have voids underneath in the form of dimples. 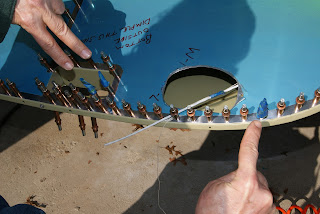 The Clecos in the three rivets holes that need to be left open if installing the wing
tip fiberglass mount for the nav/strobe lights are wrapped in blue tape. 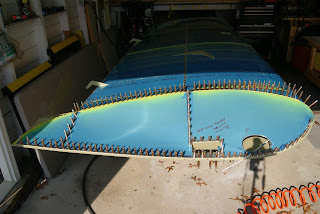 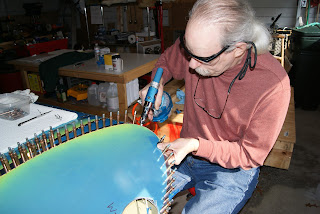 Beginning the riveting of the W-1204D-L wing tip close-out skin, working from the leading edge back. 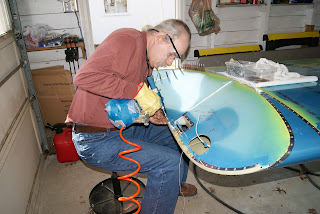 Making progress - headed towards the finish line.
Road block - the rear portion of the aft wing tip rib challenges the builder. The rivets no longer seat properly in the holes because the shaft of the rivets hit the rivets already set on the other side. (By the way, you will have this issue regardless of using flush rivets or Van’s LP4-3 rivets). 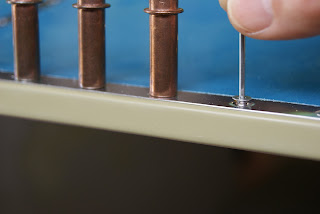 Rivet interference from the set rivet on the opposite side prevents the rivet from seating correctly in the hole.
NO  WORRIES MATE - there is a good way to deal with this and have perfectly set rivets. I have been keeping the air pressure low on the pneumatic puller so I can slowly set a rivet if desired by slowly pulling back on the trigger … it gives great control. I know the pneumatic puller would work in this situation if used carefully, but the tip on mine is so large, it hides the rivet so it is hard to see the angle of the rivet as it is being set (probably more of an issue for me because of the flush rivets). The DOG Aviation suggestion is to use the close quarters pop rivet puller AND the pneumatic squeezer. Why both? Because if you have used the hand rivet puller much, you know it kicks up after the rivet mandrel breaks and you never know which way or how far it will move (plus it is very easy to pinch your hand when the rivet’s mandrel breaks… ask how I know?).
The solution … use the hand rivet puller and push down on the tip while giving the handle a SLOW steady full squeeze. As you squeeze, your downward pressure will seat the rivet down into the hole as the mandrel is drawn up into the tool and you can adjust the angle easily. One full pull will not break the rivet’s mandrel but will fully seat the rivet into the hole. 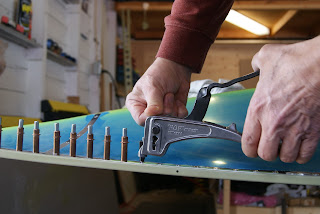 Using the close quarter rivet tool to partially set the rivet by applying downward
pressure while giving the tool one slow full squeeze of the handle. 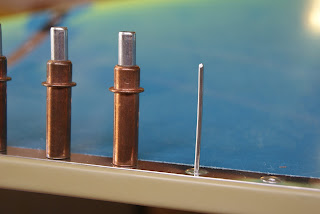 Rivet after one full pull with the close quarters hand riveting tool.
After the rivet is partially set and flush, the pneumatic puller was then used to finish off the job. The method works great! 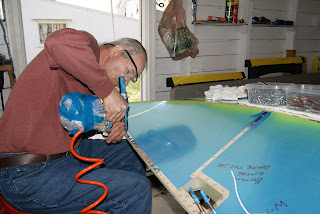 Final setting of the rivet with the pneumatic rivet puller.
The final piece to the left wing puzzle is the W-1204H-L wing tip trailing edge. I had this piece on and off a couple of times improving the fit. This part also requires being match drilled after the trailing edge is verified to be parallel to the aft edge of the wing skins. Once the piece was match drilled and removed for deburring, it was dimpled. 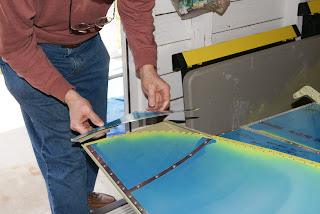 Final piece of the puzzle – the W-1204H wing tip trailing edge being set into place.
Builder tip: When riveting the W-1204D tip skin in place, I left two rivet holes open - the one for the forward hole in the W-1204H and the next hole forward. This was done to improve the look by allowing the skins to be lifted slightly to allow the tip of the W-1204H part to slide UNDER the skin at the rear spar which I feel improves the look and removes the edge from the airflow. 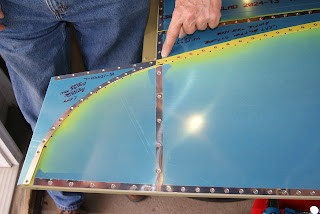 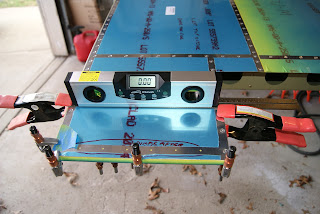 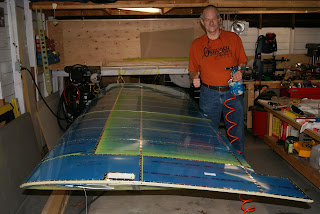 The RV-12’s completed left wing!
Now where do I put it to build the right wing?  Will have to make a wing cradle tomorrow to store the wing so construction can begin on the RV-12’s right wing.
Posted by John at 10:50 PM