After the completing the riveting of the W-1210 aft ribs onto the right wing’s main spar, the plans instruct the builder to temporally secure the rear spar in place with Clecos so two holes can be match drilled at the flaperon hinge bearing bracket. 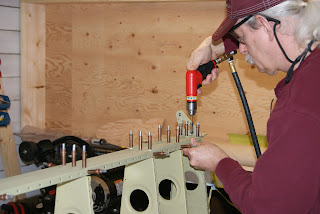 Match drilling the two center holes in the flaperon hinge bearing bracket into the inboard W-1210 rib’s aft flange.
After disassembly for deburring, the right wing’s rear spar was once again secured in place with Clecos and riveted onto the aft flanges of the W-1210 ribs. As with the left wing, solid rivets were used as opposed to the LP4-3 and LP4-4 pop rivets that would normally be used on the rear spar.
One procedural change employed was the riveting of the four flaperon hinge bearing bracket rivets using a rivet gun and a bucking bar as opposed to the pneumatic squeezer. The pneumatic squeezer was used on the left wing but the clearance was very tight and it was a fight to get on the rivets remotely square … so for the right wing, the rivet gun was tried.  The metal parts at this location are quite thick so there is no chance of denting the metal if the rivets are driven properly. This worked quite well and it would have saved me a lot of time had I done it in the first place on the left wing … changing yokes and rivet sets trying to find a combinations that worked was such a hassle because it had to be done for almost every rivet on the hinge bearing bracket.
Anyway, the four rivets that were driven into the hinge bracket using the rivet gun and bucking bar were AN470AD4-7 rivets. All the remaining rivet holes offered great access for the pneumatic squeezer so it was used to rivet all the remaining rivets that secure the rear spar onto the aft flanges of the W-1210 ribs. The rivets used at the doubler plate locations on the rear spar where AN470AD4-6 rivets and the remaining rear spar to W-1210 aft flange rivets were AN470AD4-4 rivets. 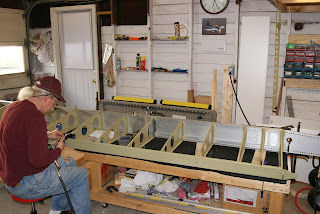 Riveting the rear spar onto the aft flanges of the W-1210 ribs with the pneumatic
squeezer using AN470AD4-4 solid rivets in place of LP4-3 pop rivets. 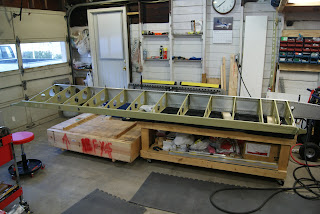 The right wing’s rear spar riveted in place using entirely solid rivets … looks great!
Normally, the next step would be installing the nose ribs onto the right spar … but decided to put that on a short hold and focus on cutting the landing light hole in the W-1203R wing skin at this point in time. When cutting the landing light hole in the left wing’s W-1203L skin, the wing skin was placed on the work bench and cut with a jig saw. The bottom portion of the cut went OK because the edge of the cut could be kept close to the edge of the workbench but while cutting the top portion of the landing light cutout which is above the leading edge curve, the skin  flapped around quite a bit ... which was troubling.
While the W-1208 nose ribs are still available, want to try using Clecos to secure the wing skin onto a few W-1208 nose ribs in the hopes that it will help keep the wing skin tensioned and hopefully better secured while the cutout is being made with the jig saw.  Theoretically, it should.  For some reason it is very difficult for me to rivet the skin in place first and then attempt cutting it … because if something goes wrong, there will be a huge number of rivets to remove in order to replace the skin.
Posted by John at 7:54 PM