While searching for the hardware to mount the light, it was discovered there were no AN3-3A bolts in the shop. Early in the project, an order was placed to Aircraft Spruce for a small assortment of bolts, nuts, washers, ect. just to have on hand. It was thought that AN3-3A bolts were in that stock, so bolts were not ordered with the additional landing light hardware. Surprise!! Unfortunately, the shortest bolt purchased was an AN3-4A.

Because the EAA technical councilors will be performing the pre-closeout inspection on the right wing Thursday, wanted to have the landing light fully installed. Unfortunately, aircraft hardware is not something you can find at the local hardware store (if you can find one) or big box home improvement store … so the search was on to find the hardware locally because there was just not enough time to order from the normal sources.  After chastising the DOG Aviation purchasing department for the oversight, a computer search began followed by numerous phone calls.  As luck would have it, probably the nation’s single largest supplier of AN aircraft bolts (and so much more) was literally in my back yard!

Airfasco was contacted and they were gracious enough to let me purchase the necessary hardware plus a few spares to add to stock. While at Airfasco, it was discovered Aircraft Spruce distributes their products ... and hearing Van’s Aircraft purchases from Airfasco as well, brought a smile to my face. 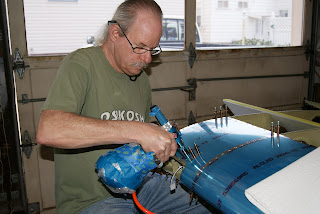 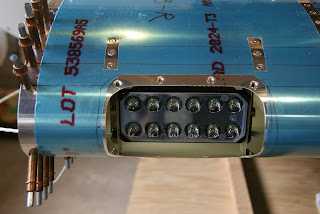 Landing light installed - note how tight it is to get to the mounting bolts. 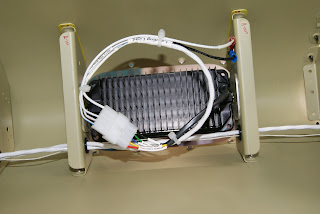 Installed right wing landing light viewed from behind ... note the shims on top of the ribs.
Even thought the wing can’t be closed out until Thursday, there are a few things that can still be worked on in the meantime. The wing tip ribs can be dimpled, locations where the top skins are overlapped can be primed and the bottom wing tip skin with all the tabs that require being bent to various angles can also be worked on. 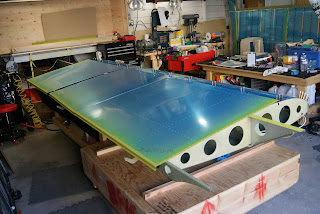 The three top skins were stripped of the blue protective film where the skins
will be overlapped, then primed and set onto the right wing skeleton to dry.
Dimpling of the right wing’s forward tip rib was accomplished using the same procedure as on the left wing. The pneumatic squeezer was used with a ‘no hole” yoke. A female dimple die of the type for use with a nail and hand rivet puller was set onto the male die for centering and then the squeezer was activated so the plunger was pushed into tape which was placed on the yoke. When the squeezer is activated, the pressure on the die squishes it into the tape. This is quite effective in holding the female die in position because it is literally glued in place by the sticky tape. 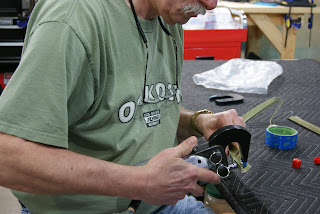 About to dimple the right wing’s forward tip rib using the pneumatic squeezer
and a “no hole” yoke with tape on it to hold the female dimple die in place. 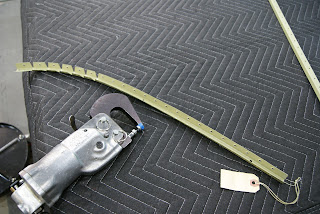 Outcome of the dimpling of the right wing’s forward wing tip rib – looks good!
Posted by John at 9:12 PM