Rack’em Up - Left Wing In The Side Pocket

Upon completion of the left wing, the DOG Aviation drafting department began working on the details for a wing rack to store the RV-12’s wings.  The design criteria was based on quick building - the left wing needed to be removed from the assembly bench and stored, to make room so assembly of the right wing can begin.  Another requirement was the need for sturdiness during transport because at some point, the wing rack will be need to safely transport the RV-12’s wings and tail feathers to an airport for final assembly. The design utilized elements from three different wing racks other builders have constructed, along with the repurposing of the long shipping crate for the spars.

After a brief delay in building to appease the tax man, the shop was rearranged to facilitate building of the wing rack. The RV-12’s right wing spar was removed from the LONG shipping crate Van’s shipped the spars in and the spar crate provided the perfect pre-built platform for the wing rack. The crate was passed off to the DOG Aviation carpentry department for conversion into a wing rack.

Because the RV-12’s wing spars extend a long ways beyond the inboard edge of the wing skins, plus have a lot of mass, a design consideration was making sure the wing rack fully supported the weight of the wing’s spar … plus be capable of locking down the spars during transport later down the road.

The fuselage kit will be arriving soon … so an effort was made to save construction time by utilizing a sling made of an 8” swath of Berber carpet to suspend the outboard portion of the wing. The sling is strategically located to support the wing at an area where there is a rib under the wing’s skin. Later, when it is time to transport the wings, the spar will be locked down and the hand hold holes at the wing tips can also be used.

An added benefit of using the spar box as the base of the wing rack is there is also plenty of room in the center section of the rack for the stabilator (and probably the rudder as well) along with near term storage of the right wing’s rear spar and the flaperon spars  ... very cool. 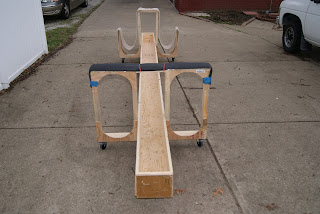 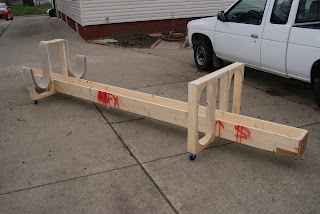 Side view of the wing rack … center section will easily be roomy enough to support the stabilator and possibly more. 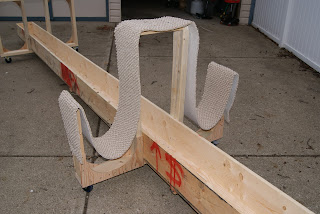 Berber carpet forms the slings for supporting the outboard end of the RV-12’s wings.
The rack worked wonderfuly ... it is solid, rolls easily and the loop in the carpeting is at the proper heigth, thus keeping the spar flat on it's support. 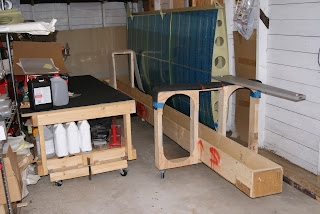