The hope was to get to some riveting in by days end, but that was not to be because of a late afternoon start. But progress was made … the right wing’s skeleton was carried outside so the top and bottom of the main spar could be primed with zinc chromate primer to add protection where the wing’s skins will be overlapping the spar.

After the spar was primed, work began on preparing the W-1201R and W-1203R inboard and outboard bottom wing skins by removing the blue protective film along the rivet lines and fine sanding the edges of the wing skins. Also the edges of both the inboard and outboard bottom skins that will be overlapped by the W-1202 skin were prepped and primed with zinc chromate primer. All that is left to do is remove the protective film from the W-1202 center bottom skin, Cleco all the skins onto the ribs and start riveting. 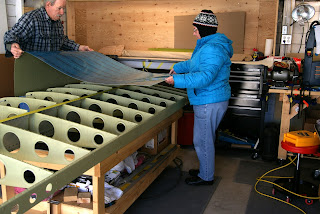 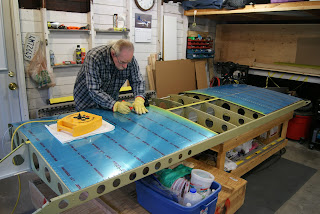 Using a soldering iron and straight edge to remove the protective
blue film from the W-1203R outboard bottom skin’s rivet lines.
It is amazing … the left wing took months and months to get to this point and now the right wing is to the same point in one week flat.
Posted by John at 9:01 PM