After the bottom skin riveting was completed, the right wing assembly was rolled so work could commence riveting the leading edge. The inboard portion of the right wing’s leading edge (where the wing walk doubler gets installed) is not riveted at this time nor are the aft nine rows of rivet holes on the W-1201,02 & 03 skins. As with the left wing, the aft nine rows of holes are left open to allow enough flex in the skins so the built in J-stiffeners in the top wing skins can slip into the notches in the W-1208 nose ribs. 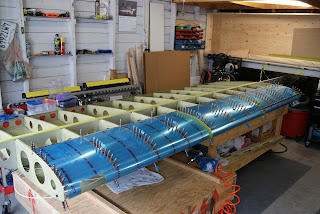 The right wing’s leading edge is secured with Clecos and ready for riveting. 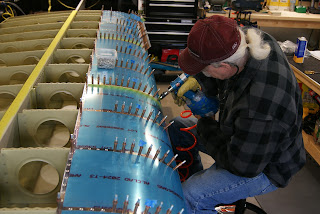 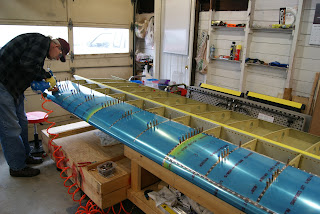 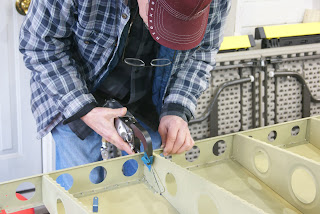 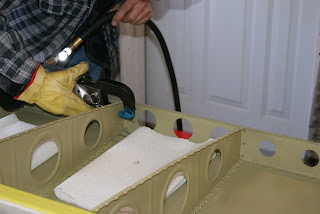 Using the pneumatic squeezer to set AN470AD4-6 rivets along
the top row of rivet holes in the flaperon hinge bracket assembly.
The remaining rivet hoes that could not be reached with the pneumatic rivet squeezer had LP4-3 pop rivets placed in them. Access is very tight, even for the close quarters rivet puller, so the trick of bending the rivet’s mandrel slightly and using a wedge between the hand rivet puller and rivet head was employed for all the LP4-3 rivets that secure the flaperon hinge bracket assembly. 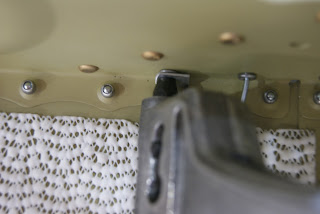 Close quarters rivet puller on a rivet with a bent mandrel and the wedge to offset the head of the rivet gun. 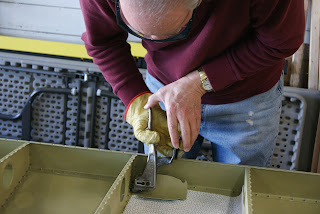 Using the close quarter rivet puller to set a LP4-3 rivet into one of the rivet holes in the flaperon hinge bracket assembly. Note the piece of scrap metal used under the rivet puller to protect the wing skin when the mandrel pops and the puller moves rapidly in …. pick a direction.
Posted by John at 8:39 PM