Riveting of the right wing's bottom skins was done using the same technique as on the left wing … starting at the center of the wing's leading edge, each row of rivets was riveted moving  alternately from the center towards the inboard and outboard edges of the wing. The removed Clecos were then moved further aft to fill in the gaps. Van’s plans require some but not all of the leading edge rivets to be left out at this time. The rivet holes on the innermost portion of the wing's leading edge where the stub spar is located are riveted now (with the exception of rivets in the wing walk area because the doubler plate is installed later), and the rest of the leading edge rivets are to be installed later when the wing skeleton is flipped over. The outboard edge of the W-1203R skin is also left unriveted at this time, as are the holes associated with the flaperon hinge bracket assemblies. 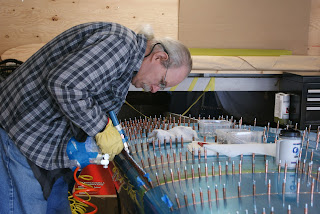 Setting the first of the bottom skin rivets into the right wing’s stub spar. 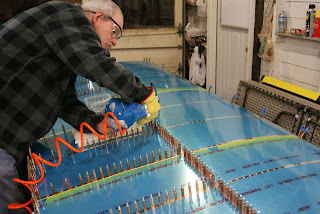 Main spar forward completed … setting the first of the many rivets into the main spar. 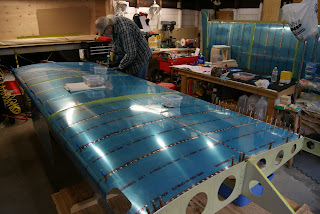 Bottom skin riveting nearing completion … the end is in sight just a few more rivets to set into the rear spar. 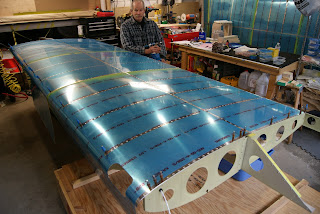