The holes for the right landing light mounting ribs turned out to be much closer to spot on than the holes for the ribs on the left wing. Believe this is due, in large part, to the method used to align the template. However, after temporarily placing Clecos through bottom rivet holes only, there was still a small gap between the ribs and the top wing skin ... not quite as much as there was on the left wing but a gap none the less. This is certainly preferable to a bulge and honestly, it is really fine … so most RV-12 builders will likely rivet and move on but the decision was made to make .040 shims and place them between the wing skin and the top of the landing light ribs. The trial fit went well so the shims were then dimpled and primed. Admittedly, it would be easier to place the shims under the landing light ribs because there are only two holes on the bottom of the ribs as opposed to three on the top. However, shims placed on the bottom will be visible … but one would have to get on their hands and knees before seeing them on the top, so that is where they will be placed. 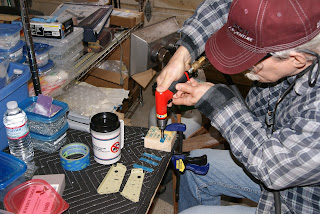 Drilling holes in the shims that will be used to close the small gap between the landing light ribs and top skin. 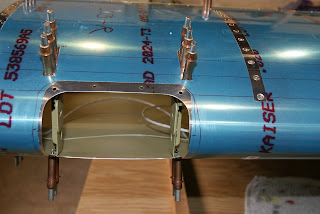 Successful trial fit of landing light ribs with .040” shims in place above the ribs.
After the trial fit, the shims were dimpled as well as the W-1203R wing skin using the dimple dies that have a hole in them for a nail that gets pulled with a hand rivet puller. The eight screw holes that will secure the landing light lens were also dimpled for #6 screws. 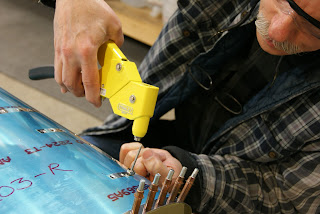 Getting ready to set a dimple into the W-1203R wing skin for the flush rivets being used on the RV-12 project. The hand rivet puller will pull up on the nail going through the dimple dies, squeezing them together, thus creating a dimple.
After finishing all the preparations for mounting the landing light ribs, attention was turned towards wiring of the landing light’s Molex electrical connector. As with the landing light placed into the left wing, shielded cable is being used. Not sure if the wig wag mode generates noise in the electrical system as does the wing tip strobe lighting, but since I have the shielded wire, it is being used.
Questions have been asked about the process of preparing the shielded wire, so photos were taken of each step utilized. First, three to four inches of the Tefzel coating is lightly scored with a razor knife and I mean lightly … don’t go into the shielding. The Tefzel at the very end of the cable is then cut all the way so it can be grabbed and pealed back. It may be necessary to deepen the score in spots to get the outer coating to peal evenly.  Next the shield is pushed up and opened so the wires inside can be fished out one at a time. Heat shrink is placed over the shield then its pulled back and the transition point is dressed with another piece of heat shrink. Pictures are worth a thousand words…. 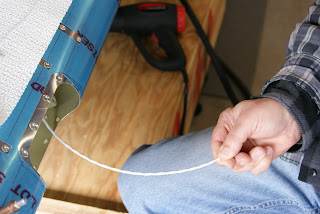 Tefzel shielded cable about to be prepared for the landing light’s Molex electrical connector. 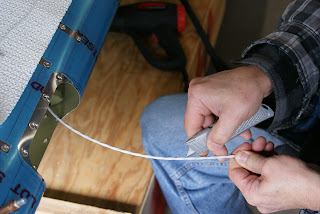 Using a razor blade knife to lightly (and I mean lightly) score about three to four inches of the Tefzel coating. 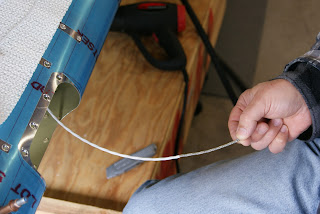 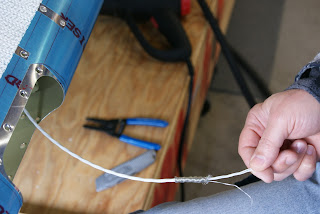 Shielding is then pushed up the wire so it bunches up. 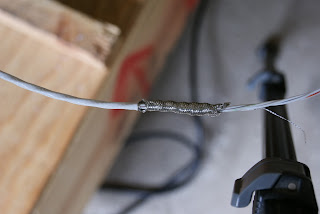 The thin shielding strands are carefully pushed aside, trying not to break
any of the strands, to create a “hole” revealing the inner wires. 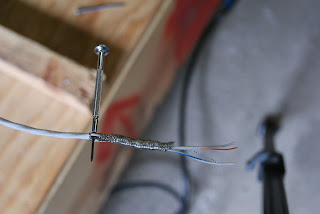 A small jewelers screwdriver or similar object is used to begin drawing the wire out of the “hole”. 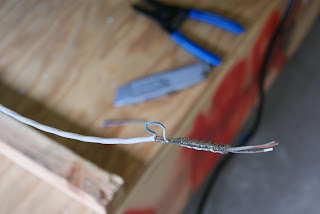 After a loop is obtained, the wire can be completely pulled out through
the "hole". This process is repeated for the remaining wires. 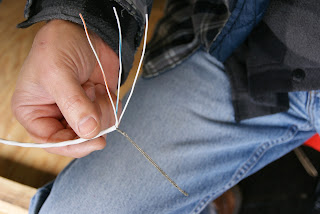 Once the wires have been removed from inside the shielding, the shielding is pulled tight making it a long braided wire. 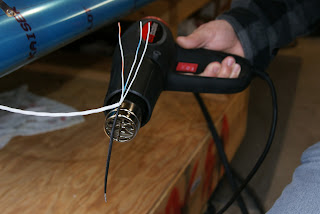 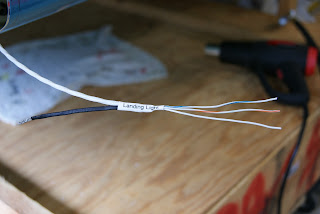 The shield wire is then pulled back parallel with the cable and a piece of heat shrink is used to dress the transition point. 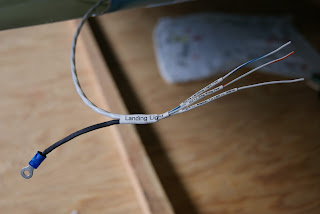 Heat shrink with wire designations printed on it is then placed onto the wires.
A more frugal way of designating the wiring is to use a printer to print designations , then cut the paper and place it under clear shrink tubing. 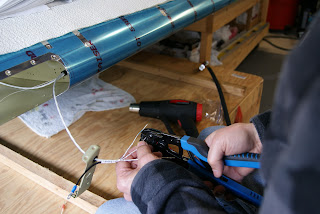 Crimping .062” Molex connector pins onto the ends of the wires. 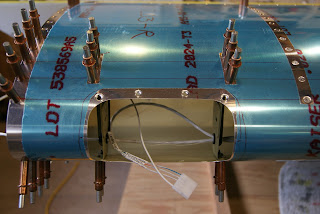 Presto … finished Molex connector for right wing’s landing light in place and ready to be connected to the landing light.

Prior to mounting the landing light tomorrow, thought it would be prudent to test the light using a couple of 9v batteries wired in parallel. 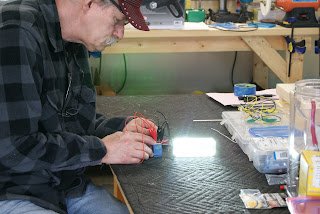