Being a 20 degree morning, it took a little time to get myself motivated to brave the cold in the shop but was able to make some progress preparing for closing out the left wing tip.

The W-1213L tip rib was dimpled months ago but there were a couple of holes that were not dimpled at that time because the pneumatic squeezer was to big for dimpling the last holes in the tip rib. At the time, I decided to worry about it later.  It’s later now … so had to dimple those holes and ended up using a method I came up with early on in the project. A nail is used to hold the dies aligned as a C-clamp squeezes the dies together thus forming the dimple. 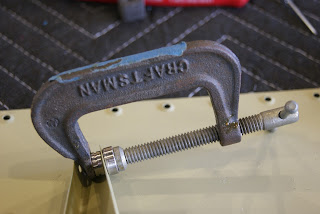 Using a C-clamp to squeeze the dimple dies together to form a dimple in the W-1213L tip rib. 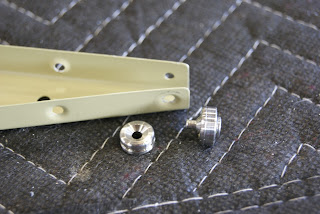 A short nail (not long enough to extend past the female die) is used to center
the dies as they are squeezed together by a C-clamp. Works great!

After the last couple of holes in the tip rib were dimpled, the rib was attached to the rear spar with Clecos and accessibility for the pneumatic squeezer was checked. Accessibility was good ... so instead of using LP4-3 pop rivets to attach the tip rib onto the rear spar, AN470AD4-4 solid rivets were used instead. 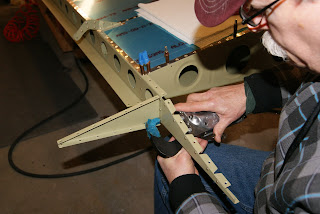 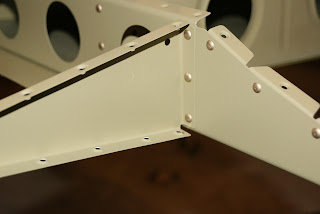 Because the RV-12 has wings designed to be easily removable, Van’s has incorporated a hand hold at the outboard tip of each wing to make removal/instillation of the wing quite easy. Since my RV-12 is utilizing flush blind rivets, there was a hand full of holes on the W-1204G-L hand hold that required dimpling followed by a little primer touchup. Once the holes were dimpled, the handhold requires a little forming by way of making two 90 degree bends to form it into a three sided box which will be riveted onto the main spar.  Here again, clearance for the pneumatic squeezer was deemed good (barely) so AN470AD4-4.5 solid rivets were used in the place of LP4-3 pop rivets. 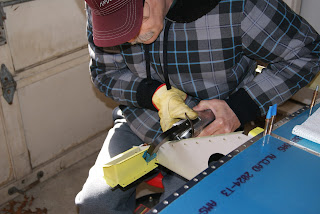 Using a pneumatic squeezer to rivet the W-1204G-L hand hold
onto the left wing’s main spar with AN470AD4-4.5 solid rivets.
The last item riveted onto the wing tip portion of the left wing was the W-1204C skin. Once the skin was riveted in place, the wing assembly was flipped back over so the finishing touches can be made to the landing light assembly before closing out the wing tip and losing all “easy” landing light access. 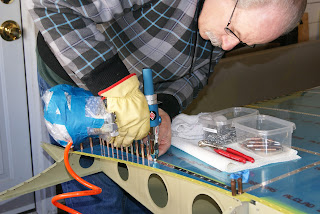 Riveting the small W-1204C skin in place onto the left wing.