Assembly of the right wing skeleton was temporally halted so the landing light cutout in the W-1203R wing skin could be completed. I rather make the cut now as opposed to after the skin is riveted in place … just in case something goes wrong. My thought was to use Clecos to attach the W-1203R wing skin onto a few of the W-1208 nose ribs to keep the skin tight so it won’t flap around like the left skin did while being cut with the jig saw. This idea worked marvelously, so I can recommend it to fellow builders planning on using a jig saw as their weapon of choice for cutting the landing light cutout.

Once the tracing of the right wing's landing light cutout from the template onto the W-1203R wing skin was completed, the bottom portion of the cutout was cut first. The corners of the cutout were drilled out with a step drill to make access holes for a jig saw which was outfitted with a 24 teeth per inch blade. For the first cut, the W-1203R skin was placed on a bench with the leading edge curve hanging over the edge of the bench and the very bottom cut line was kept close to the edge of the bench so the skin would not bounce around while being cut. The bottom cut was then extended into the leading edge curve about half way on both sides. 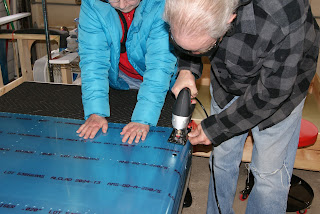 Jan helping to hold the W-1203R skin in place while cutting
the very bottom edge of the landing light cutout with a jig saw. 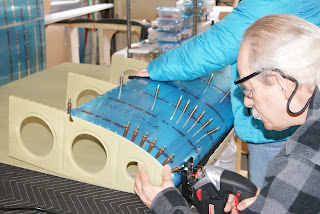 Cutting the upper portion of the landing light cutout with a jig saw while the W-1203R skin was secured
to three of the W-1208 nose ribs. This worked great to prevent the skin from flapping around. 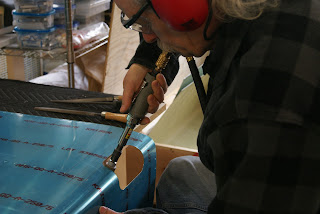 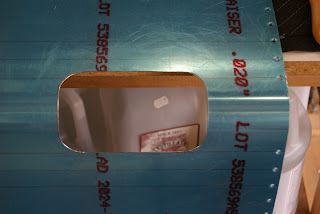 Finished landing light cutout in the W-1203R wing skin.
After the detour for the landing light cutout was completed, work continued on construction of the right wing skeleton and the entire lot of W-1208 nose ribs were installed today as well. As on the left wing, AN470AD4-4 solid rivets were used to install all of the ribs except the extra ribs in the wing walk doubler area which, due to clearance issues, were riveted with LP4-3 pop rivets.
The experienced RV-12 builder will also notice in the following photos the W-1208 nose ribs were installed in the reverse order than called for in Van’s instructions. The reason for this is … during construction of the left wing it was determined that if the assembly order were reversed, it would be much easier to use the pneumatic squeezer. 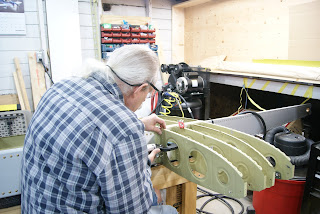 Using the pneumatic squeezer to rivet one of the W-1208 nose ribs
onto the right wing’s spar assembly with AN470AD4-4 solid rivets. 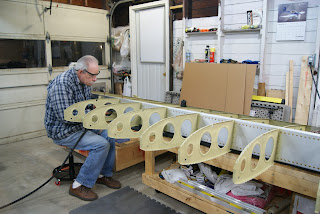 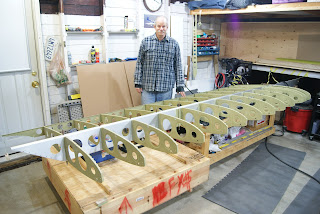