The reshaping of the landing light lens for the left wing’s light was a pain … here again there has been a few weeks to come up with a better way to fit the lens.  The lens was inspected closer and it was determined the process of bending the lens at the factory left the lens not only over bent but it also created a small rise at the far outer edges in the area of the leading edge. I think this went unnoticed the first time around and contributed to my fighting with the lens to get it to set flush (or close to) on the inside of the W-1203 skin’s leading edge.

First the lens was coated with painters tape to prevent unwanted scratches while working on it. Knowing that quite a bit of material is ultimately removed from the lens, the outer edges of the lens were zipped through the band saw to remove the portions of the lens that were raised from the bending process … while at it, most of the material that would ultimately be removed anyway was also removed. Now having flat Plexiglass to work with made the rest of the process much simpler than last time. 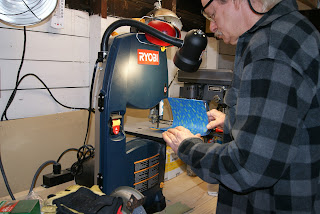 Using the band saw to trim the excess material off the landing light lens prior to reforming the lens with heat.
Earlier in the morning the DOG Aviation R&D department played around with scraps of Plexiglass from the first lens after placing painters tape on them. It needed to be determined if using a heat gun would fuse the tapes glue into the Plexiglass when it got hot enough to reshape a bit … it does not.
Donning a pair of gloves, the lens was heated up with a heat gun set to low until it was good and hot (but not pliable soft or almost melting) and the bend was gently relaxed a bit. The Plexiglass was given a good heating a second time and then pressed up against the leading edge of the wing to cool … it dawned on me the perfect shape the lens needed to be was sitting right in front of me … staring at me. Because there is a tendency for thicker Plexiglass to want to go back to its original shape, the process needs to be repeated a few times. The end result was a much faster and better initial fit than the lens for the left wing. 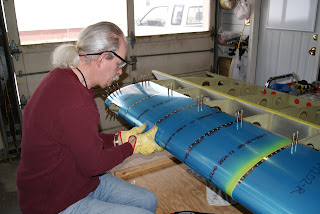 Holding the hot Plexiglass lens firmly up against the wing’s leading edge
to cool so the lens gets reshaped to match the wing's leading edge curve.
After the landing light lens was reshaped, it was placed behind the cutout in the W-1203 skin aligned for best fit then drilled and secured with Clecos. 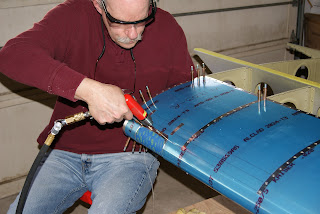 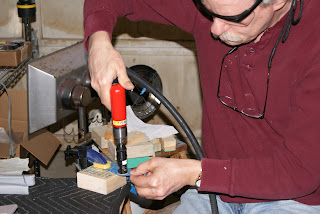 Using the countersink cage with a #27 bit to machine countersink
one of the landing light lenses clamped onto a piece wood.
Posted by John at 8:53 PM