Yesterday time at hangar 45 was spent between reviewing the plans and checking off work items that have been accomplished recently, looking ahead and lastly, beginning the dressing of the wire and tubing running through the RV-12's center channel.

One of the tasks sitting on the back burner for a long time was securing the filter capacitor that connects onto the power wire for the electric fuel pump. The plans instruct the builder to wire tie the capacitor snug against the wires and tubes running adjacent to it and then place a dollop of silicone under the capacitor to secure it onto the bottom skin. Permatex sensor-safe blue RTV silicone gasket maker was used because it is non-reactive to aluminum. Have been holding off on doing this because of the way I ran the wiring into the tail cone prior to it being connected to the fuselage … the wiring run needed to be free so the electric trim and additional static air line could be pulled forward to the instrument panel as the tail cone got closer to the fuselage. 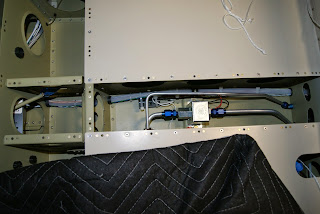 Continued dressing the center channel wire run between the seats and also removed some material from the F-1276 system blocks to create just a little more room. This may not have been necessary but it created a little more space for all the wires and the extra static air tubing for the backup instruments. 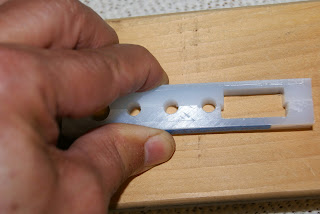 A band saw was used to remove just a little more material from the F-1276 system block as can be seen on the lower block in the photo. 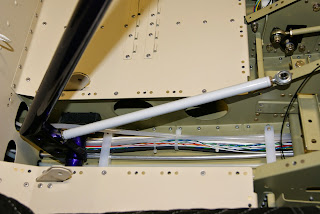 Still a work in progress - but the center tunnel area between the seats is beginning to look tidy.

Next the edges of the F-00049 cover plate were bent per the plans. This cover plate forms a cap over the portion of the center channel wiring run that is underneath the flaperon mixer assembly. The cover plate requires additional hand bending to conform it to the wiring run ... this has not been completed yet, so will be the first order of business during the next work session.

The last few work sessions have been taking their toll … it has been necessary to do a lot of bending and stretching while working on the wire runs a good recipe for major soreness.
Posted by John at 7:25 AM