Continuing on where work stopped yesterday, progress was made installing the left F-1265 flaperon pushrod. The forward end of the pushrod was attached onto the flaperon mixer bellcrank. The right WD-1215 flaperon torque arm was installed next. 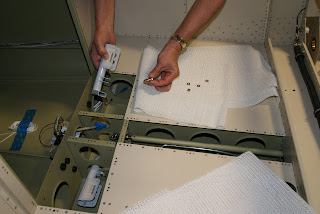 About to install the left WD-1215 torque arm onto the F-1206D bearing bracket.

The aft end of the F-1265 flaperon pushrod was installed onto the left WD-1215 torque arm. Because these last two assemblies need to be removed after match drilling the flaperon torque tubes, these parts were just tightened down snug but did not waste the time torquing the bolts since all this gets disassembled after the match drilling process. 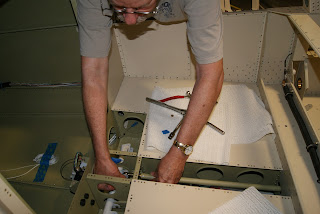 Installing the bolt that secures the aft end of the left F-1265 flaperon pushrod onto the left WD-1215 flaperon torque tube. 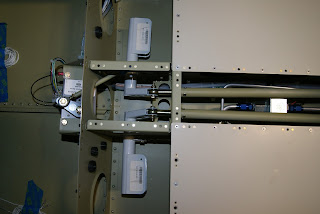 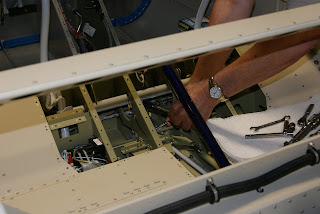 Tightening the hardware for the F-1264 control stick pushrod. 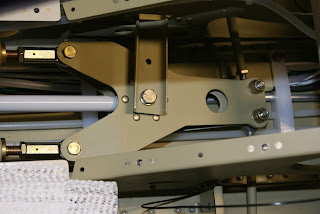 Before any more work can be done on the flight controls the wings need to be attached so the flaperon torque tubes can be installed and match drilled to the WD-1215 flaperon torque arms. This will have to wait for at least a week because of Rotax engine classes I will be leaving town to attend.
Posted by John at 7:06 PM