Having missed a work day yesterday to resolve a plumbing issue at the house, was eager to finish riveting the F-1270-A&D doublers onto the fuselage. The same procedure was used as on the right side for aligning the F-1270 side skin and F-1270-A&D doublers ... in that some Cherry CR3213-4-2 rivets were used in a few locations to “pin” the parts together to hold alignment while Clecos were added to secure the parts together. Granted doing this takes some extra time … but doing so will be a significant aid when trying to insert the close tolerance Cherry pop rivets into the flanges on the center section.

The F-1270A skin doubler receives LP4-3 rivets except for the three rows of rivet holes common to the flanges on the F-1204 center channel assembly.  The F-1270D doubler sits on top of the F-1270A doubler and typically receives a combination of LP4-3 and CS4-4 rivets but decided to just use all flush CS4-4 rivets because some of the rivets will not be covered by the wing and will be visible. 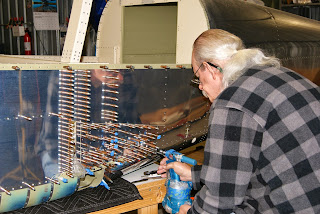 Beginning the riveting of the right F-1270A skin doubler onto the fuselage using LP4-3 rivets and the pneumatic rivet puller. 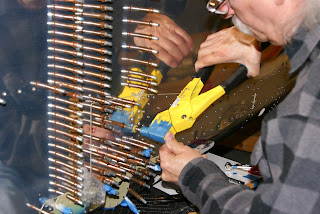 Have to say, when using a hand rivet puller to set the robust Cherry CR-3213-4-2 rivets, you will be giving your hand quite a workout and also improving your Kung Fu grip.  After all three rows of Cherry rivets were set into the flanges on the center channel assembly, the remaining rivet holes in the F-1270A&D skin doublers common with the right F-1270 side skin were riveted. The remaining rivet holes common with the F-1270 skin and the flanges on the F-1204 center channel assembly were riveted with the flush rivets being used on the DOG Aviation RV-12. 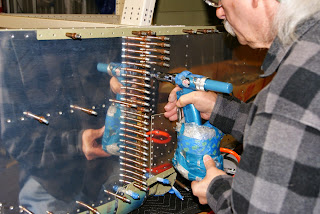 Using the pneumatic rivet puller to set flush rivets into the flanges of the F-1204 center section assembly. 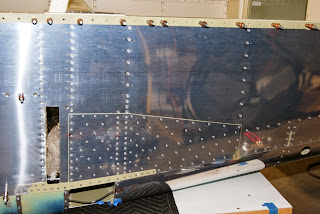 Right F-1270 side skin and F-1270A&D doublers riveted from the forward flange of the center section aft.
Posted by John at 9:10 PM