Made a more in depth evaluation today of the wiring slot in the F-1230 tunnel cover and decided not to make a separate slot for the two brake lines. Because the slot in the F-1230 tunnel cover is centered and the wires and tubing exiting the F-12125 raceway are far left of center, the wires and tubing need to be pulled to the right quite a bit before they begin to go into the slot in the tunnel cover. To make this task slightly easier, a wire tie was used to bundle all the lose wires together but not the heaver cables.  At first glance it appeared as though the wires and tubing almost fit nicely, however the brake lines prevented the panel from closing the gap with the firewall shelf. After analyzing the fit, felt enough clearance could be obtained just by widening the slot a little on both sides and wire tying the brake lines so they are on top of one another when they enter the slot. 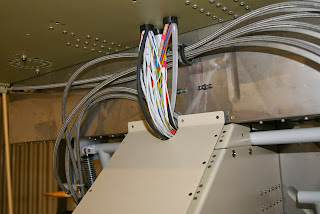 After swinging all the wires and tubing to the right and grouping all lose small wires together, a trial fit was made to determine how best to proceed with the modification of the F-1230 tunnel cover. The brake lines need more room to enter the slot.

Wanting to remove the least amount of material as possible, the slot was marked so cuts could be made on both sides of the slot. The idea was to allow the entire wire bundle to move a little to the left so the brake lines could slide down to the right of the wiring bundle. Tape marking the cut so the slot in the F-1230 tunnel cover could be widened with the band saw.

If one needs to go this route, take note of the 1/16" jog on both sides of the slot just after the flange. This is for a piece of plastic wire grommet that will wrap around the circumference of the slot to protect the wires from the edge of the tunnel cover. If you make cuts here, you should hand file and make new jogs so the wire grommet material makes a smooth fit. After cutting and filing, determined the fit was almost perfect but the slot needs to be made a little deeper to accommodate the static tube. 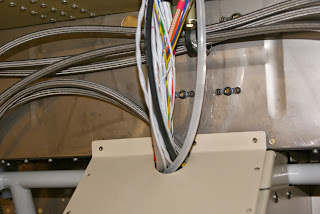 Almost there. After cutting the slot wider and recreating the jogs in the tunnel cover it fits much better now … the brake lines are now inside the slot but the cover is pushing on the static air tube. The slot will need to be made slightly deeper so there is room for the grommet material without deforming the tubing.

Because of a very late start today, did not have the time to finish up on the tunnel cover. So will finish up on the cover tomorrow and move on. Have to say, yet again, so glad I thought of test fitting the F-1230 tunnel cover now rather than later. It is so nice to be able to slide in behind the side skins to do this trial fitting as opposed to climbing in and out of the cockpit and being very uncomfortable the entire time.