Swoosh, Pop – Bang  … was the sound for the day. It was the sound of progress being made in hangar 45 as the RV-12 fuselage began looking less like a porcupine and is slowly transforming to resemble a completed airplane fuselage. The side skins are receiving the same flush rivet that has been used elsewhere on all the exterior skins of DOG Aviation RV-12 ... with the exception of the longeron rivet holes, which are receiving slightly longer CS4-4 rivets. The CS4-4 rivets have a slightly smaller head so they were chosen because they required less material to be removed from the longerons when machine countersinking the longerons for the flush rivets. 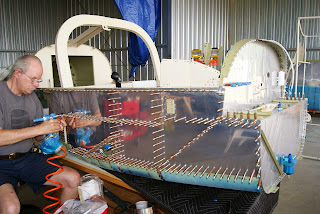 Using the pneumatic rivet puller to set the first of many flush rivets in the right F-1270 side skin … the flush rivets are being used in lieu of the standard LP4-3 rivets. 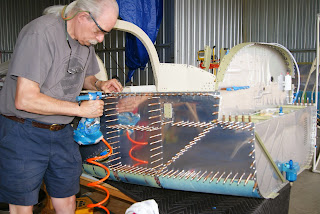 Using the pneumatic rivet puller to set a CS4-4 into the right longeron. 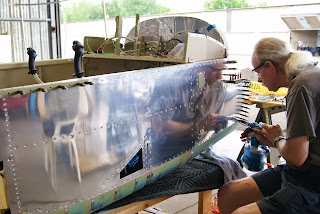 Riveting the last flush rivet in the F-1270 side skin for the time being. 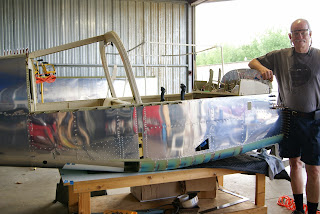 Completed right side skin all that is missing is the cowling hinges.

Started working on the left side skin by placing more Clecos in to all the rivet holes and then began riveting up the left F-1270 side skin. As with the right side, there were no issues or surprises … just the typical Van’s perfect fit. One thing I was doing which I forgot to mention earlier is reaching inside with the Cleco pliers and using the soft coated handles to push on the flanges of the seat pans and arm rests while riveting so the flanges ended up snug to the F-1270 side skin. Doing this insured a nice tight fit. 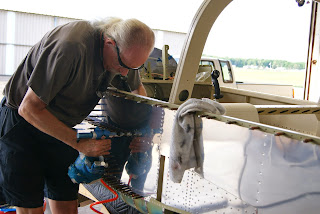 Reaching inside the fuselage and pushing on the armrest flange being riveted to prevent gaps when the rivet is pulled with the pneumatic rivet puller. 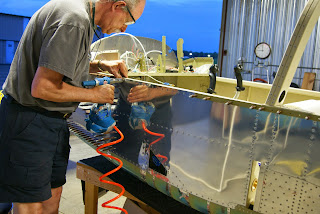 Using the pneumatic rivet puller to set a CS4-4 rivet into the longeron … this will be the last rivet for the evening.

Didn’t quite get finished today … so have about an hour or so of riveting left to finish up the left side of the fuselage during the next work session.
Posted by John at 10:09 PM