Drilling One Moment – On A Tangent The Next

Work continued on match drilling the F-12117 cowl hinges and F-1201W spacers. The lower cowl hinge for the right side was matched drilled and then clamps were moved over so the left side lower cowl hinge and spacer could be match drilled. Stopped short of machine countersinking the hinge components for the flush rivets being used on the project. 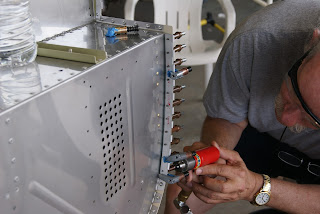 Long time friend Bernie stopped by and we were reviewing upcoming tasks and items that still need to be figured out in the not too distant future. One item discussed was the mounting of the autopilot panel & knobs panel. This discussion turned out to be my distraction and the evening progressed on a tangent from that point on … but a good one.
Frequent readers of the DOG Aviation Blog may recall there are plans to install backup airspeed and altimeter instruments in the RV-12. Originally, they were slated to go in the unused panel area above the slot for the Garmin radio. However, that all changed when Van’s offered the AP and knobs panels because they too need to be installed in the area above the Garmin radio … which will push the backup instruments over to the left of the glove box.
The discussion with Bernie got me wondering if there would be room for both the AP & knobs panel PLUS an airspeed indicator above the Garmin radio. After Bernie left, being curious, I began making lots and lots of measurements and made marks where Van’s template would have the builder cut the holes. Now knowing the spacing above the radio, a horizontal line was drawn and the template scooted over as far to the left as possible leaving minimum clearance with the stack angles. A quick check reveled the nutplates also take up a little room as well so an allowance was made for them as well. The way the template works is the outer edges of all the slots mark the cut lines … once the template is removed, the lines are then connected to establish the pattern for the cutout. 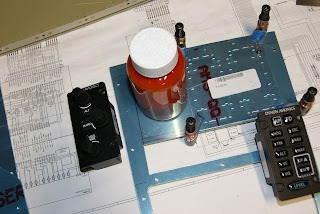 As can be seen in the photo of the backside of the center instrument panel, instead of being centered, the template was scooted over so the AP and knobs panels will be as far to the left as possible but still clear the stack angles. Note the nutplate in the upper right takes up a little room as well … so it needs to be included in the overall measurements for clearance calculations.
With the panel template scooted over as far as possible, there is just enough room to install the airspeed indicator to the right of the AP and knobs panels. The brown bottle is basically the same diameter as the airspeed indicator and, as can be seen in the above photo, it WILL clear the knobs panel … but not by much.
Even though assembly was halted … figuring out the placement of the AP and knobs panel template to accommodate the airspeed indicator was time well spent … plus, a relief knowing it will all fit in the upper portion of the instrument panel.
Posted by John at 9:43 PM