Normally the victory photo would be saved until last, but completing the wiring for the Tosten CS-8 control stick grips marked a two fold pivotal moment in the construction of the DOG Aviation RV-12. First, the wiring for the two control stick grips is finally completed. Second, this marks the completion of all the RV-12 wiring aft of the instrument panel. The wiring runs still need to be dressed with wire ties … so there is still a little work left to be done with the wiring in that regard. 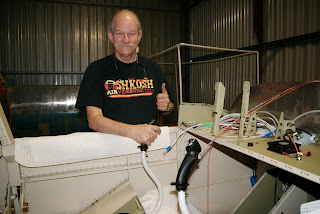 Victory! Wiring for the Tosten CS-8 control stick grips completed and tested to the instrument panel. All switches in both CS-8 grips are fully functional.

The work today that lead to the momentous occasion began with fabrication of the Molex connector on the end of the transfer cable on the co-pilot side. This was a little tricky because two wires needed to be crimped onto each Molex male pin … one wire runs across the fuselage to the other control stick grip and the second wire is routed forward to the instrument panel. Male pins were purposely chosen for the Molex connector at this location because the male pins are a hollow tube. This works out nicely because the wire insulation can be stripped off a tad longer so there is barely enough bare wire to twist the two wires tightly together … the excess wire can slide into the hollow male pin. Proper strain relief is very important here as well, so to aid in the proper positioning of the wire in the crimping tool, a line was drawn on each wire marking the location of the strain relief on the male pin. 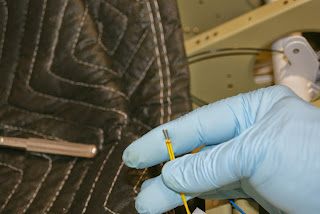 Marks were placed on the insulation of each wire so the wires could be inserted into the crimping tool at the right depth to consistently obtain a perfect crimp. 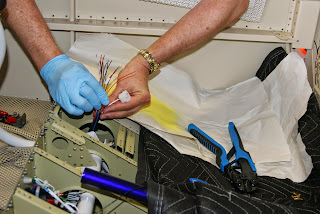 With the exception of the white co-pilot push to talk wire and the ground wire already installed in the Molex connector body, all the remaining male Molex connector pins will receive two wires. 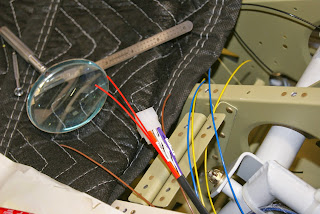 About half way done … only four more male Molex pins left to fabricate. 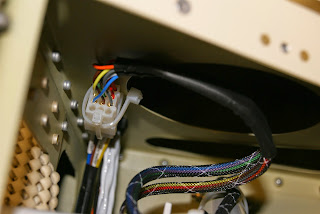 Now for the big question … do all the switches work correctly and control the correct wire? To answer that a meter was used to verify proper switch operation between the two Tosten CS-8 control stick grips and to also verify none of the other switches affected proper operation. Happy to report all switches are fully functional and control the proper wires.
Posted by John at 9:30 PM