The first order of business today was to clean the lower cowl parts along with a few other items requiring priming with acetone, do a little scrubbing with Scotch-Brite and re-clean the parts with acetone. Mixed up a 1 oz batch of primer and broke out the airbrush.  One thing that amazes me is it takes just about as long to spray a couple of small parts with the airbrush as it does to use the large spray gun to spray a bunch of large parts. When one takes into consideration the prepping for spraying, getting the compressor hose outside, adjusting the air flow, mixing the paint, waiting for the induction time (30 minutes), cleaning the measuring ladles, breaking out the respirator and goggles, straining the paint, spraying the parts, walking back and forth to hang the parts for drying, then tearing down the airbrush for cleaning with acetone followed by reassembly. Anyways, the lower cowl hinge components were primed as well as a few other miscellaneous items.

After the spray painting equipment was put away, started going through the plans and finishing up on small things here and there not worthy of photos. Because of the large amount of skipping around through the plans that has taken place, one practice that has been incorporated is to mark steps in the plans which have temporarily skipped with a colored vinyl flag that has an adhesive similar to a post –it-note. During the last few days have been able to remove quite a few of the flags. One such item that had a flag was the instillation of a grommet in the center section where the wires come up. Van’s instructs the builder early on to slice the grommet so it can be spread to fit over all the wires coming up through the hole in the center section.  Rather than taking the grommet in and out as wires were added, I just left it out untill now. Installing the grommet should be an easy task, but I was finding it a little difficult to spread the grommet open with one finger while sliding the wires through it. I came up with an idea that made the instillation a snap … fellow builders may want to remember the following trick. I used a pair of snap ring removing pliers to hold the grommet open so the wires could be easily slid inside of it. 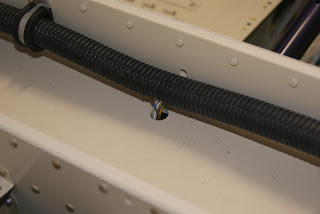 Wires coming up through the hole in the center channel. This hole is to receive a wire grommet that has been split. 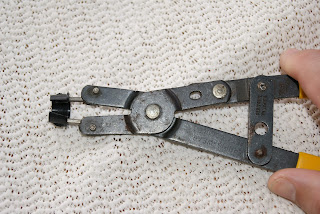 Moving onto section 32 - installing the flight controls, work resumed where it had left off a few weeks ago. The parts for the flaperon mixer bellcrank were rounded up and discovered yet another challenge … a washer needs to go UNDER the F-1263B flaperon bellcrank, then the flaperon push tube is sandwiched between the F-1263A&B flaperon mixer bellcrank pieces. All of this slides in between the F-1212A&B flaperon mixer arms and is bolted together. This was not an easy task … and trying to get all the pieces aligned without losing the bottom washer seemed darn near impossible. After a couple of unsuccessful tries, came up with the idea to tape the washer in place … this is the way to go. 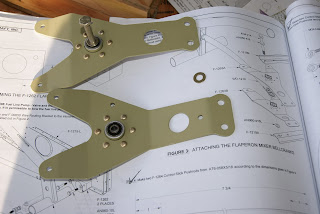 Builder tip: Cut a couple of long pieces of blue painters masking tape with scissors so there is a nice straight edge. Center the washer over the bolt hole on the lower portion of the F-1263B flaperon bellcrank and tape the edges of the washer down onto the bellcrank making sure no tape covers the bolt hole. (The masking tape needs to extend beyond the sides of the bellcrank so it can be grabbed and pulled off later). Position the F-1263B bellcrank over the bolt hole in the F-1219A mixer arm. Place the bolt through the center of the bellcrank to verify it is aligned with the mounting holes in the mixer arm, then remove the bolt while keeping steady downward pressure on the bellcrank to hold positioning. Add the flap handle pushrod and again add downward pressure on the pushrod to hold positioning while the upper F-1263A bellcrank is added … then drop in the bolt and hand tighten. Do not final tighten the bolt yet. Verify that the washer did not fall off by using an inspection mirror while lifting up on the assembly to gain viewing clearance. If the washer is still in place, continue lifting the assembly and pull the masking tape down and away from the washer. Look closely at the ends of the masking tape … if it still has the perfectly straight edge from the scissors cut, you know no tape was left behind on the washer and you are good to go. 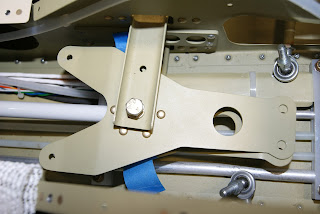 F-1263A&B flaperon mixer bellcranks and flap handle push tube mounted on the F-1219A&B mixer arms. Note the two pieces of blue tape that were used to keep the bottom washer held in place during assembly of the parts. 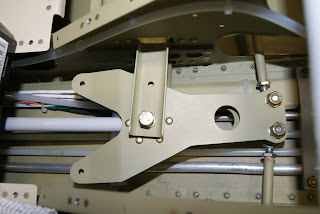 Next the F-1264 control stick pushrod assemblies were attached to the F-1263A&B flaperon mixer bellcranks.

Did not tighten any of the hardware yet because want to also install the flaperon pushrods so everything can be tightened at one time. The flaperon pushrods have already been cut and primed but still require assembly and riveting during the next work session.
Posted by John at 10:19 PM