The first order of business today was to determine if removal of the static air tubing from the center channel system blocks would garner enough room to allow the F-00049 wire cover plate to clear the flaperon mixer arm. The answer was quickly determined as yes … but the wires and pitot tubing have to be made as flat as possible. That is easier said than done … because getting everything to fit under the F-00049 wire cover plate is akin to stuffing 5 pounds of crap into a 3 pound bag. As it was, the cover just slightly touched the flaperon mixer arm when the arm was moved to its forward most position. So the F-00049 was removed, yet again, and tweaked just a tad and finally got the necessary clearance. Builders who have installed the ADS-B antenna cable can expect practically no clearance between the F-00049 wire cover plate and the flaperon mixer arm. There is not much more room than the thickness of a couple of sheets of paper. 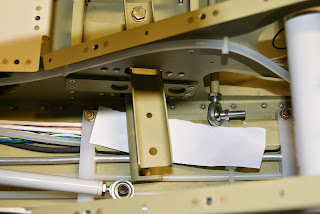 F-00049 wire cover plate installed between the two F-1276D system blocks. Not much clearance but enough room for a piece of paper between them.

As can be seen in the above photo there is just enough clearance between the F-00049 wire cover plate and flaperon mixer arm to slip a piece of paper between them. The gap is almost nonexistent … however, moving the mixer arm through its full range of motion does not move the paper. 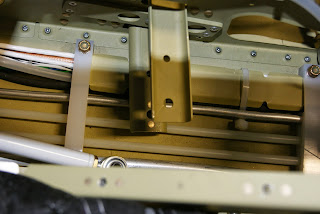 A wire tie was slipped around the F-00049 wire cover plate and wire bundle then under the fuel return line to create a slight downward pressure on the cover plate to insure it stays out of the way of the flaperon mixer arm.

Now that dressing wires in the center tunnel section between the seats is completed, moved onto tidying up the wiring runs traversing the cockpit from side to side. Placing wire ties around some of the wiring was tough because it was difficult to get hands in some of the areas. To aid in installing some of the wire ties a long hemostat proved most useful. 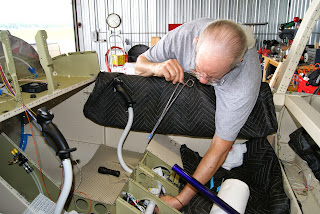 Using a long hemostat to help fish a wire tie around the wires running under the co-pilot seat.

The last wiring item needing attention under the seats was dressing the slack in the wires connecting the switches on both the control stick grips together. The slack was pulled in the lightening hole and wire tied onto the wire run behind the F-1203A bulkhead. This slack was necessary to accommodate the wire crimping tool used to fabricate the pins for the Molex connector. 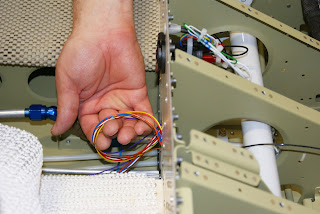 Leftover slack from installing the Molex connector for the control stick grip wiring. This slack was wire tied onto the wires running behind the F-1203A bulkhead.

A piece of heat shrink tubing was placed over the wires for the stick grip switches and the bundle was fished forward on its way to the instrument panel.  After the stick grip wires were in place, the center tunnel wires between the F-1202F and F-1203A bulkheads were dressed with wire ties. 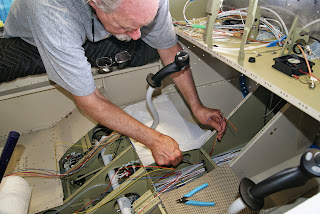 Pulling in the stick grip wires which marks the last of the wiring headed to the instrument panel. 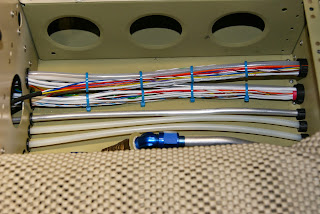 Center tunnel wires between the F-1202F and F-1203A bulkheads all dressed up and waiting for someplace to go.

Finished up the work session by climbing into the cockpit and placing wire ties around the wires between the F-1202F bulkhead and the fuel flow meter. Stopped short of tying down the Molex connector for the fuel flow meter. At this point, I ran out of time and decided it would be best to give my back a bit of a rest as well. 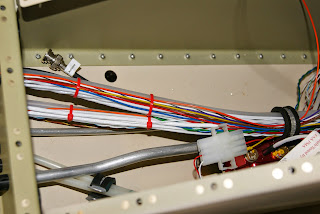 Wire ties around the two wiring runs between the F-1202F bulkhead and the fuel flow meter.