During this work session I had some assistance from out of town helpers. Long time friends Kurt and Roger paid DOG Aviation a visit and were quickly put to work helping with the riveting of the tail cone onto the fuselage. Roger and I shared in the riveting task while Kurt removed and/or  moved Clecos and fed rivets to us. Of note: The portion of the tail cone’s side skin that is riveted onto the F-1255-L&R longerons received a slightly longer CS4-4 rivet than the 4-3 rivets primarily being used on the RV-12 project. 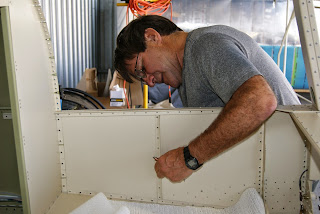 Kurt placing Clecos into the F-1256L skin stiffener to secure it onto the F-1270L fuselage side skin for riveting. 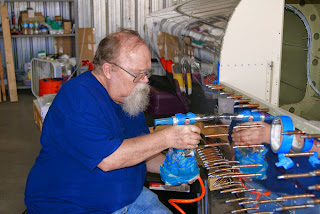 After taking a quick lesson on using the pneumatic rivet puller, Roger was setting the countersunk rivets being used on the DOG Aviation RV-12 like a pro. 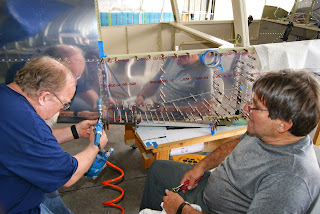 Roger setting some rivets with the pneumatic rivet puller while Kurt supplied the rivets, manned the Cleco pliers and used a shop towel to clean the dimples. 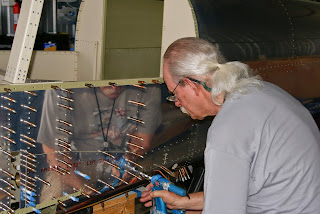 Not wanting to miss out on any of the fun … had to get some riveting in myself. 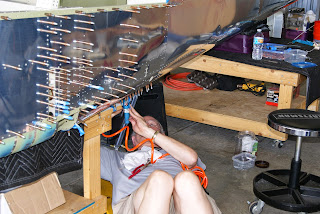 On Mike’s creeper riveting the under belly of the RV-12’s bottom skin to tail cone joints.
Posted by John at 6:01 AM