Now that the primer on the guard I made to keep the static tube secured to the top of the flap handle block has dried, it was bolted down onto the left flap handle block and the bolts for both blocks were tightened. 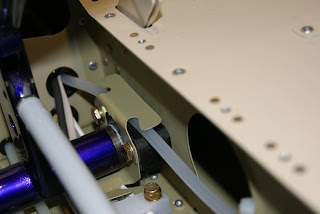 The guard that was made for keeping the additional static tube secured on top of the flap handle block is now bolted in place.

With the guard for the static line now installed on the left flap handle block, the instillation of the F-1265 flaperon pushrods could begin. But first the flaperon pushrods need to be assembled. Months ago the threaded rod ends were placed in the pushrod tubes and four rivet holes were drilled. To insure the parts went back together correctly, each rod end and tube received tags with matching numbers. Each tag was placed through the matching rivet hole for that set. 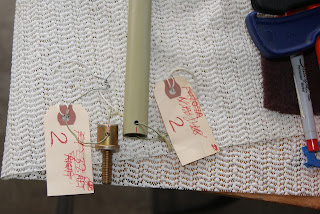 Frequent readers of the DOG Aviation Blog may recall I had center punched the rivet hole locations prior to drilling without the threaded rod end inserted … which apparently slightly deformed the tube enough to make getting the threaded rod end in and out a tough chore.  During reassembly, a thin film of Corrosion X was placed on the parts to add a little slick factor along with offering some long term protection. The rod ends needed to be tapped back into the tube. Not wanting the damage the rod ends a washer with tape was slid onto the threaded rod end and a deep socket was used to tap the rod end into the tube after eyeballing for perfect alignment. To verify rivet hole alignment after the pieces were mated, a 1/8" center punch pin was placed into the rivet holes. I got lucky and did not have to fuss with any of the rod ends, they all aligned perfectly. 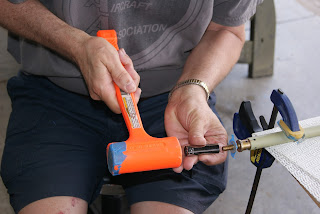 Setup for tapping the threaded rod end into the flaperon pushrod tube. 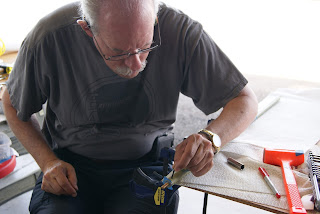 After the rod ends were fully seated in the pushrod tubes, they were riveted in place using MSP-42 pop rivets. 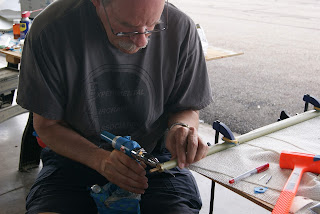 Riveting the threaded rod ends and pushrod tube together with MSP-42 pop rivets. 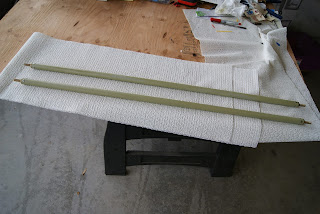 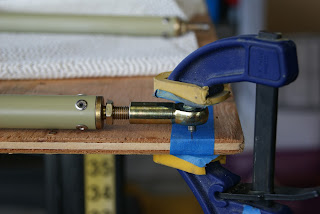 An AN3 bolt is centered and clamped over the line. This holds position as adjustments are made to obtain the correct length of 38 3/4". 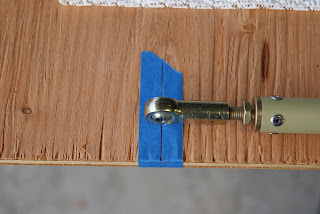 Other end of the rod end bearing centered over the 38 3/4" mark. 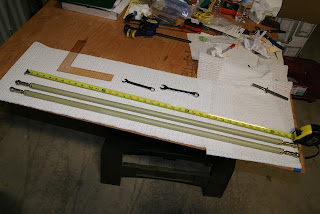 Completed F-1265 flaperon pushrod assemblies 38 3/4" long from the centers of the holes in the bearings. Note the two bearing assemblies at each end of the pushrod are orientated 90 degrees from each other.

Because the auto pilot servo is already installed, I found it best to install the right F-1265 pushrod first by passing it along the left side of the servo motor and then bringing it forward through the holes in the center channel bulkheads on the right side. Installing the mounting hardware at the flaperon bellcrank assembly was challenging … trying to do it with your fingers is really tough because there is little room coupled with bad angles. I used the age old trick of using a box end wrench with tape closing off one end of the box so the nut would not fall through and then secured the washer to the wrench with a little more blue masking tape. This method worked out quite well. 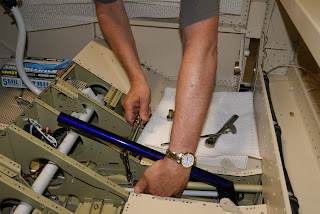 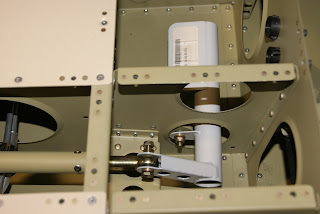 Did not have time to completely install the left F-1265 flaperon pushrod assembly so completing that will be the task for the next work session.
Posted by John at 8:44 AM