Entering The Belly Of The Beast

First let me start by saying my hat goes off to those builders who have gone before and followed Van’s instructions to attach the tail cone onto the fuselage prior to doing the wiring. I’m soooooooo glad to have done all that work while either standing or sitting on a rolling chair prior to mating the two.

Rounded up a board (formerly a side piece off one of the shipping crates) and cut some lumber 3’ long to span the baggage floor. A moving pad was placed onto the baggage floor and the board was placed in the throat of the beast. The F-1207B bulkhead is thin and unsupported so used a combination of 2x2 and 2x4 boards to adjust the height of the board so it cleared the upper edge of the F-1207B bulkhead as not to bend it when slithering inside the beast.

Once the boards were in place … rounded up some wire ties, a flush cutter and a couple of small pieces of split wire loom tubing. Donning a headlamp, set upon the task of dressing the wiring and tubing in the tail cone. Wearing the headlamp and looking at the board going inside the throat of the beast, gave way to thoughts akin to a surgeon using a big wooden tongue depressor … say ahhhhhh. 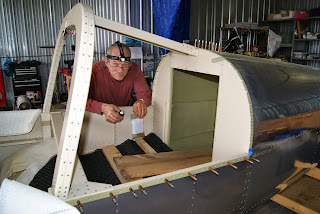 Having donned a headlamp and armed with wire ties, it was time to enter the throat of the beast … say ahhhhhh.

All I can say is … prepare to be VERY uncomfortable. Part of the time I was working off my back … then had to switch to my side which, because of my position on the board, required installing some of the wire ties single handed. That is quite a challenge.  Not being overly happy with the way Van’s has the wires running in a “J” channel stiffener on the tail cone’s side skin, decided to take a slightly different tact. Basically, did not like the way some of the wires were up against the edge of the channel … nor did I like the way the ADAHRS wires entered the channel and exited. Had some split wire loom tubing so used it to protect the wires entering and exiting the “J” channel … admittedly it is quite ugly but for this application it is function over form. 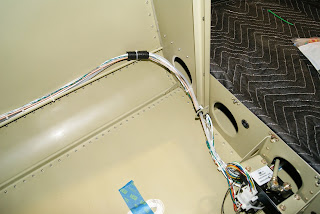 One can see how the wires and tubing come up from near the bottom skin and cross over the edge of the “J” channel on the tail cone’s left side skin. 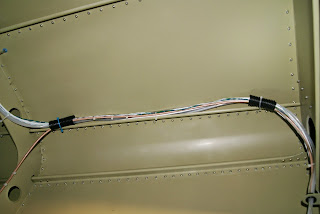 Wires and tubing dressed with wire ties running along the trough the “J” channel provides on the tail cone’s left side skin. 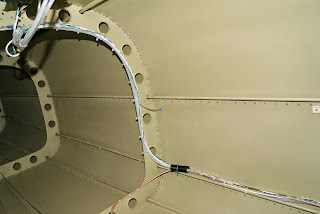 Wiring and tubing wire tied down onto the F-1208 tail cone frame.
Posted by John at 5:18 AM