Forward Half Of F-1270 Side Skins Ready For Rivets

This work session began with finishing up work on the F-1230 tunnel cover. I’m almost embarrassed as to how long it took to get the fit to my liking. However, because the tunnel cover was already painted, did not want to take the chance of a power tool marring the finish should a slip up of some sort occur …. So there was a lot of hand filing and it took three test fittings before I had enough material removed from the slot so the wires and tubes all fit along with the protective grommet. 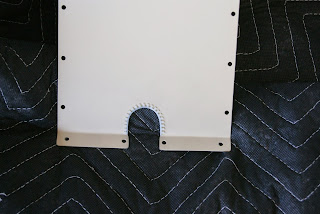 Protective grommet installed. It took quite a bit of hand filing made the slot in the F-1230 tunnel cover large enough. 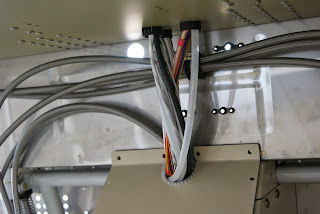 Final fitting of the F-1230 tunnel cover. It is a snug fit, but now the tunnel cover now fits over the brake lines, wires and poly tubes with the protective grommet in place.

Now finished with the fitting of the tunnel cover and with everything installed in the tunnel area except for an antenna mount, figured it is now time to move on and Cleco the side skins in place, plus Cleco the F-1295 and F-1202N-1 stiffeners in position.  So the forward half of the F-1270 side skins are now prepared for receiving rivets the next work session. 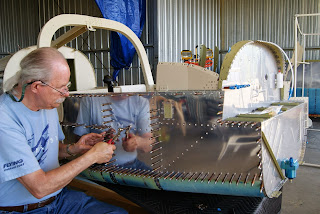 Securing the right F-1270 side skin onto the fuselage with Clecos. 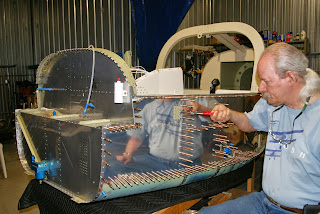 Adding Clecos to the left F-1270 side skin readying it for riveting during the next work session.

Now that both side skins are in place, will begin finishing up the riveting of the side skins onto the fuselage during the next work session.
Posted by John at 9:28 PM